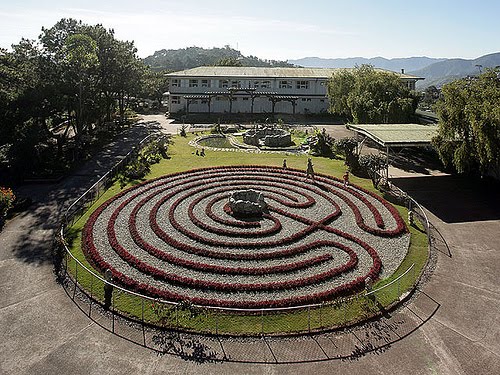 Mirador in Baguio City, had four stages in its life; it began as a branch of the Manila Observatory, then became a villa house where Jesuits of the Ateneo de Manila took a break during the hot summers. When the Communists expelled the Jesuits in China, it became a house of studies for the Jesuit of the Far East Province (1952-67). Beginning in 1967, the house was opened for retreats and as a meeting center for Church groups.

Although the present house designed by Architect Gines Rivera dates to 1952, the house is the third residence built by the Jesuits in Baguio. The history of Mirador begins in 1876, when Don Manuel Scheidnagel, governor politico-militar of Baguio named the hill El Mirador, meaning lookout or vantage point, because the hill offered a panorama of Lingayen Gulf, La Union and the South China Sea. In 1890, Fr. Miguel Roces, Rector of the Ateneo Municipal de Manila suggested acquiring a piece of property in the Province of Benguet to build a sanatorium for Jesuits. The belief then was that the temperate climate of the mountains could restore the strength and health of Jesuits zapped by the humidity and heat of Manila and the lowlands. In 1894, a request was made to purchase El Mirador but the request was not acted on immediately and the Philippine Revolution caught the Jesuits in the middle of this turbulent time. 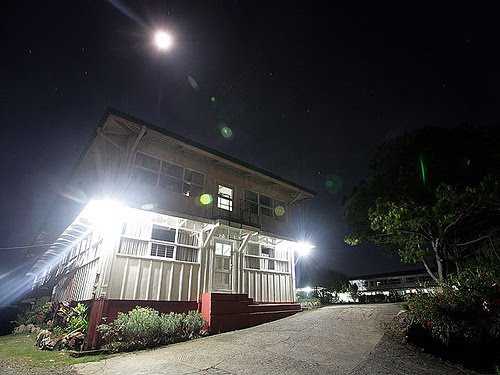 In 1900, under the Americans, the Jesuits were able to establish a meteorological and seismic station at Mirador. In 1906, the Jesuits bought Mirador at public auction conducted under the auspices of the Philippine Commission in May of that year. The following year, 1907, the Jesuits build the first of three residences at Baguio. This three-bedroom house of pine boards and cogon roof was built as a staging point for the construction of a more permanent structure of stone and mortar. From 18 March to 5 June, several Fathers took their vacation in this house and also began administering the sacraments in Baguio and La Trinidad. The year 1907 is marked as the official beginning of Mirador as a Jesuit house.

In 1908, the Jesuits built a road to the summit of Mirador, and on it constructed a building of stone and mortar. During the summer of that year a large contingent from Manila spent their time enjoying the coolness of Baguio.

The Lourdes Grotto, a very familiar and much photographed spot, was constructed in 1913 at the initiative of Fr. José Algue, S.J., the director of the Manila Observatory. Five years later, the stairway from the grotto to the foot of the hills was completed.

During the War (1941-44), the Jesuits were forced to abandon their house because Japanese soldiers occupied it. In 1945, the house was completely destroyed during the retaking of Baguio by Allied Forces decided to relocate in Baguio. Meanwhile, the mission superior, Fr. Leo Cullum, S.J. decides to rebuild the villa and improve the Observatory’s plant. He designated MIT graduate, Gines Rivera, as the master planner. Rivera planned three parallel wings, attached by a corridor. He opted to build using pinewood and galvanized iron sheets because a stone building was too damp, especially during the rainy season that lasted for more than half a year. He left the summit of the hill free to allow residents of the villa an open space for exercise and sports. In 1952, the Manila Observatory decided to relocate its whole operation from Manila to Baguio. At this time, the Ateneo had decided to leave its premises in Intramuros and Malate and transfer to Quezon City. This decision must have precipitated the Observatory’s decision to relocate. The Observatory remained in Mirador in 1962, when it transferred yet again to the Ateneo campus in Loyola Heights Quezon City.

Heritage Features: Gines Rivera designed the villa house following the type of construction used by the colonial government for houses in Camp John Hay, Teachers’ Camp and the summer homes of the Supreme Court and Court of Appeal justices. This is a house raised on stilts, away from the damp earth of Baguio. Structural beams and posts, floor boards and walls are all of wood, usually pinewood. The exterior may be covered by galvanized iron sheets, especially where the wood would be exposed to the elements. The houses were generally whitewashed but had a deep green roof and deep green window and door trim.

Mirador Villa has three fireplaces faced with pinewood and rough limestone, quarried from the present site of City Camp. Its chapel all of wood was decorated by a Jesuit brother from Hungary, who inlaid designs on the pews, pedestals and altar of the chapel.

The Grotto, which has been an integral adjunct of the villa, was built in slow stages by Jesuit scholastics (seminarians), brothers and fathers over five years, usually during the summer when Jesuits from the lowland would augment the community’s population. The image of Our Lady of Lourdes is of polychromed molave. It was carved by Isabelo Tampingco, whose name is inscribed at the back of the statue. The inscription behind reads “I. Tampingco Manila 1913.” (Fr. Rene Javellana, SJ)
at 12:23 PM